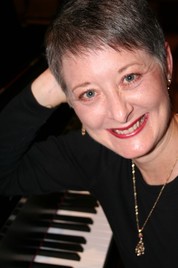 Beth Palmer, a Virginia native, studied piano at Appalachian State University in North Carolina under Dr. Allen Kindt. After her move to Nashville, Tennessee to pursue her Master's degree at Vanderbilt University, she was a member of the Nashville Symphony Orchestra and pianist for the Nashville Symphony Orchestra Chorus. Ms. Palmer has lived in Connecticut since 1983, performing widely throughout the state where she is eagerly sought as an accompanist on piano and harpsichord by soloists, choruses, chamber ensembles and musical theater pit orchestras. Her playing has been described as "mesmerizing" and "entrancing".

Additionally, Ms Palmer's keyboard expertise and flexibility also extend to the organ, with her performances as an ensemble organist with area orchestras and chamber orchestras being enthusiastically received. She is best known for her work with conductor, Dr. Carole Ann Maxwell and The Mendelssohn Choir of Connecticut, of which she has been a member since 1985 and accompanist since 1988. She has also accompanied the Fairfield University Summer Festival Chorus since its inception in 1994. She was the rehearsal accompanist for the Connecticut Grand Opera and Orchestra and its Resident Chorus from 1990-2002, and has also served as rehearsal accompanist for the Yale Opera Chorus since 2000. Ms Palmer also has the privilege of being the rehearsal pianist for the Greater Bridgeport Symphony Orchestra. Other ensembles and soloists with whom she has had the privilege to collaborate and perform over the years are too numerous to mention but include frequent appearances with the Fairfield University Glee Club and Chamber Singers, The Round Hill Chamber Players, The Stamford Mastersingers, The Connecticut Gay Men's Chorus, The Stratford Oratorio Society, Dr. Joe Utterback, Edward Pleasant, Gunnar Sahlin and Sharon Gordon, to name a few.

​In addition to performing, Ms Palmer also has an active teaching schedule, serving on the faculty of the Ensign-Darling Vocal Fellowship Program of the Bushnell Center for the Performing Arts in Hartford, CT, as well as being an Instructor of Piano at Fairfield University. She also regularly adjudicates in the Young Musicians Festival sponsored by the Schubert Club of Fairfield County. Ms. Palmer's musical skills also extend to arranging orchestral scores for piano. In 2004, Ms Palmer received the honor of being the first "Artist in Residence" named by Trumbull High School, and as such, is actively involved in the music education programs at THS, as well as the two middle schools in Trumbull, Madison and Hillcrest. Ms. Palmer is profoundly thankful for the mentoring and friendship she shares with David Allen Wehr, Hillman Distinguished Professor of Piano in the Mary Pappert School of Music at Duquesne University.
​